Home  /  Project   /  Circular Economy: What you need to know before starting your sustainable journey 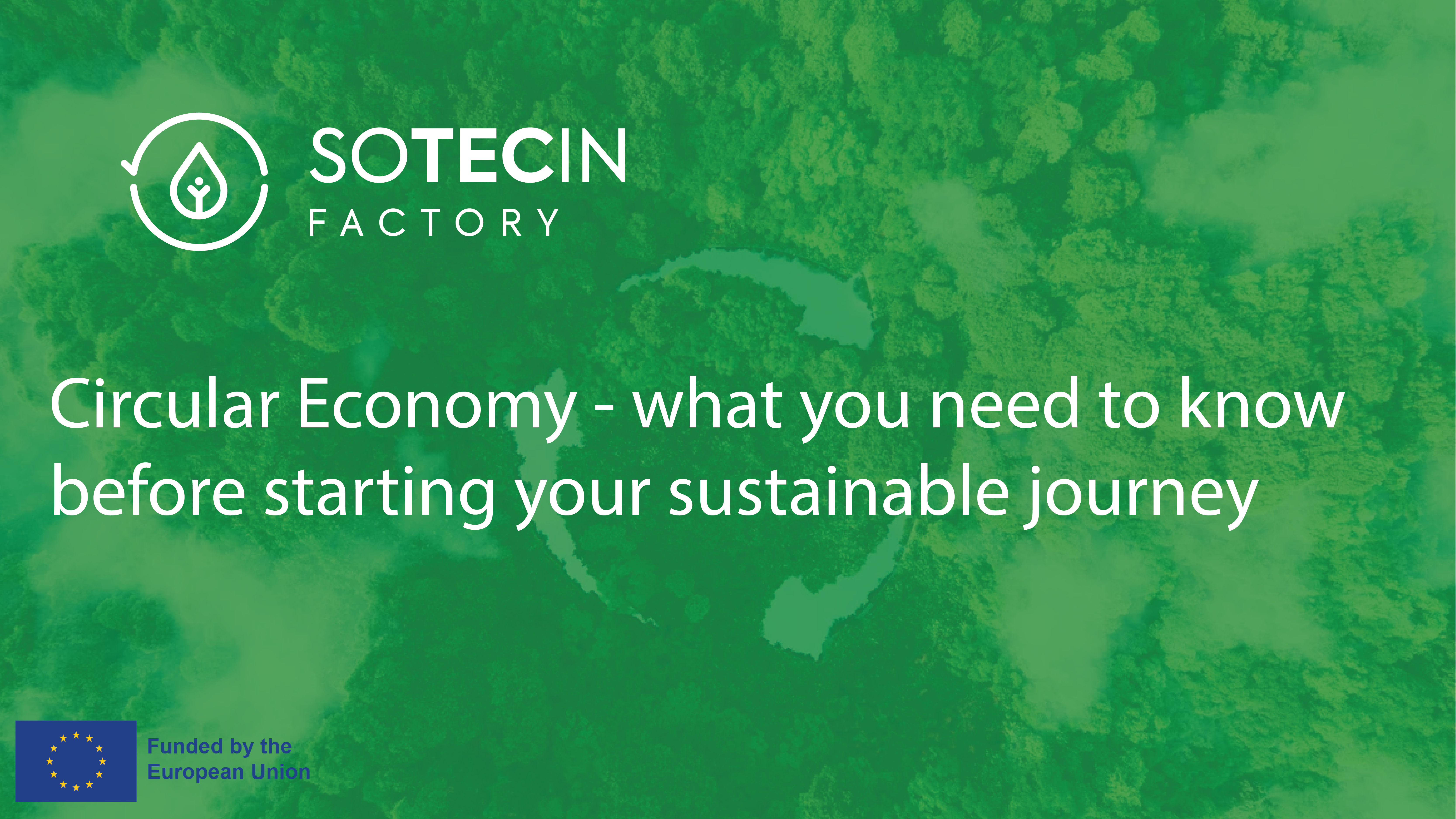 Circular Economy: What you need to know before starting your sustainable journey

Circular Economy – it’s a title of numerous newspaper articles that we have noticed over the years, as well as the focus of many industry and policy initiatives such as a EU 2021 Circular Economy Action Plan. Most of the of the industry and general society hardly sees it as a new concept anymore. But, the novelty and capacity of this economic model is just reaching its’ true brink of discovery, with projects such as SoTecIn Factory aimed at incubating social innovation ventures in support of the circular economy transition of key industry value chains.

To start such an ambitious journey, we first must understand the basic principles of circular economy which are simultaneously the goal of this alternative industry approach:

The circular economy is a model of production and consumption which aims at reduction of waste to a minimum, as well as of the excessive exploitation of natural resources by continuously extending the life cycle of the product. In a nutshell, when a product reaches the end of its life, its materials are productively reused in a way that creates further value, thus closing “the loop” of circular production.

This concept is in sharp contrast with the traditional, linear economic model, which is based on a take-make-consume-throw away pattern, as well on the intensive use of cheap, easily accessible materials and energy during production.

Such industry practice has resulted in linear economy becoming the cause of global humanitarian issues such as climate change, material scarcity and pollution, vulnerability to global shocks, and, most importantly, the vast economic and environmental impacts associated with inefficient production systems, use, and loss of material value.

Circular economy in comparison provides several benefits: Improved security of the supply of raw materials,  significant industry de-carbonisation through reduction of CO2 emissions , as well as the potential to stimulate innovation and competitiveness by increasing the EU’s GDP by an additional 0.5 % and creating around 700 000 new jobs in EU alone by 2030.

Seven Pillars of the Circular Economy

SoTecIn Factory partner Metabolic has worked on further facilitating holistic understanding of circularity, through their ‘Seven Pillars of the Circular Economy” framework, which captures different areas that we must simultaneously consider when assessing whether certain activities are genuinely circular, from high value material preservation, to protecting global biodiversity and enhancing human well-being. 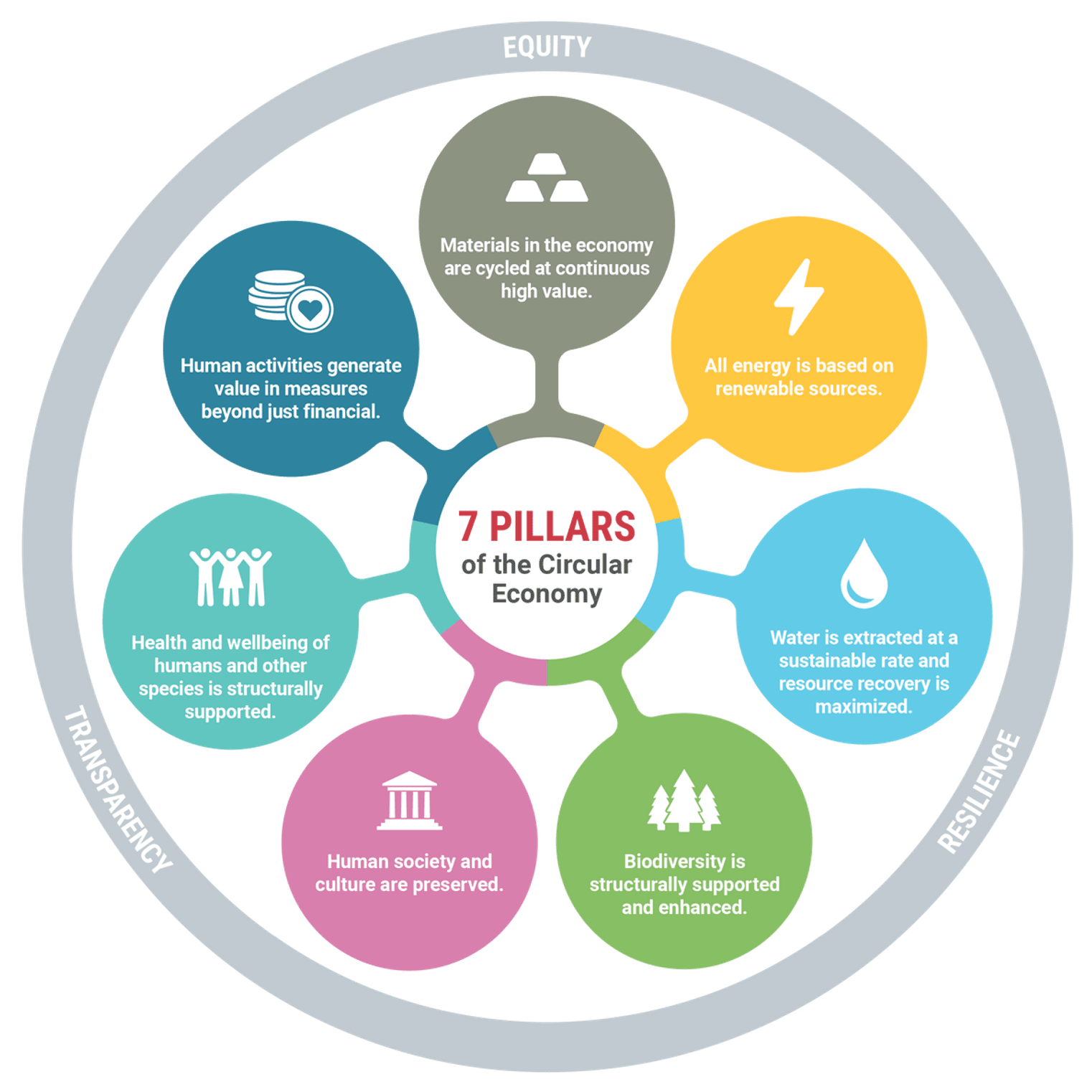 To ease the process of connecting external audience to our circular products based on the said pillars, we must also have in mind three additional properties that these products have to possess which are:

Despite continuous advancements and new initiatives, the concept of full circularity is still very hard to achieve. It is especially challenging to retain the producing components close to their original level of utility. Nevertheless, industry experts have developed different resource management techniques over the years by deploying the framework of several circularity strategies aimed at achieving the infinite production loop of using as few new resources as possible, with highest possible value.

Within the circular economy, the so-called 9R Framework positions these strategies in a systematic hierarchy based on the potential which the specific strategy possesses to achieve the end goal of circularity. The infographic down below has been produced by project partner Metabolic and it illustrates the said hierarchy through “Value Hill Model” of circular production: 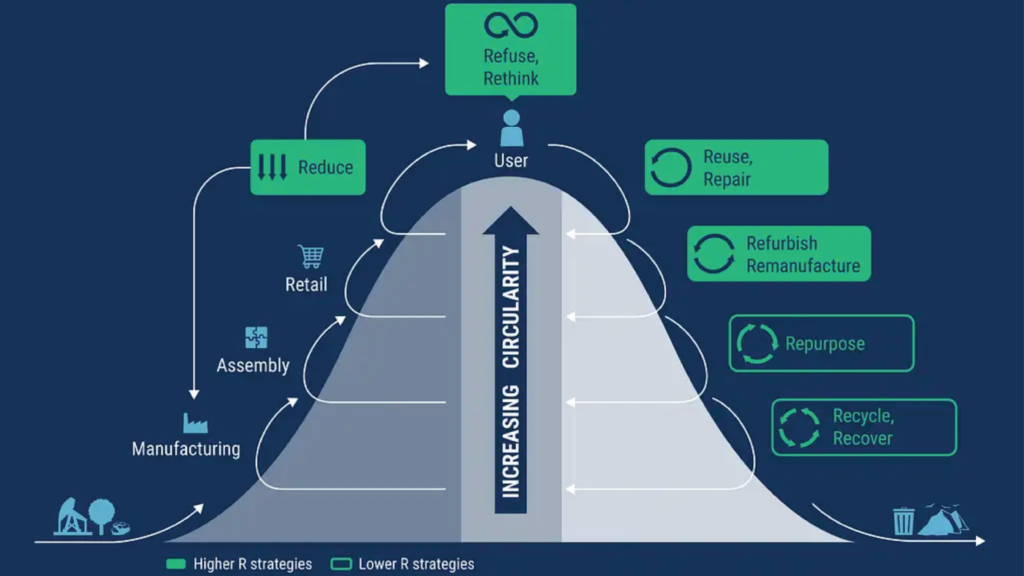 As seen on the infographic, Refuse, Rethink, Reduce, Reuse, Repair, Refurbish, Remanufacture, and Repurpose are considered higher value R strategies as they more effectively retain and prolong the economic and material value of products by requiring fewer resources during production. Lower value R strategies: Recycle and Recover, in comparison become an option at a later stage, when other R-strategies are no longer possible.

SoTecIn Factory focuses on supporting ventures that address the higher R circular strategies, in line with the objective to truly maximise the highest possible value of materials at each point in a product’s lifecycle.  Based on the 2017 research paper of Potting, José; Worrell, Ernst; Hekkert, M. P., the following list briefly explains the said strategies as the basis of potential SoTecIn Factory social innovations:

Make product redundant by abandoning its function or by offering the same function with a radically different product or service.

Example: Use of alternative materials (e.g., glass, plants such as fungi) instead of plastic and leather to produce packaging or textiles.

Make product use more intensive (e.g. through product-as-a-service, reuse and sharing models or by putting multi-functional products on the market).

Example: Turning bicycles from product to be bought to bicycle-sharing services to be used jointly by citizens.

Increase efficiency in product manufacture or use by consuming fewer natural resources and raw materials.

Example: New business models against over-manufacturing which consider production solely upon order or creation of reusable products with multiple purpose.

Re-use by another consumer of the discarded product which is still in good condition and fulfills its original function.

Example: eBay as a digital “flea market” for product redistribution.

Repair and maintenance of defective product so it can be used with its original function.

Refurbishment describes the improvement of products. These are not only repaired, but also brought up to the current state of the art.

Example: Revitalisation of discarded furniture into vintage pieces; Recovery of used electronical devices which are later restored (e.g., change of the battery, update of the operational system) and then resold on the market.

In contrast to refurbishment, remanufacturing involves using parts of discarded product that are still perfectly intact into a new product with the same function.

Example: Use of leftover textiles such as discarded linens are used as vintage fabrics to produce aprons, banners, raincoats by a steam laundry.

Use discarded product or its parts in a new product with different function.

Example: The use of discarded apples to create apple bio-leather.

Are you interested in learning more? Subscribe to our newsletter to read more about sustainable industry and SoTecIn Factory project! 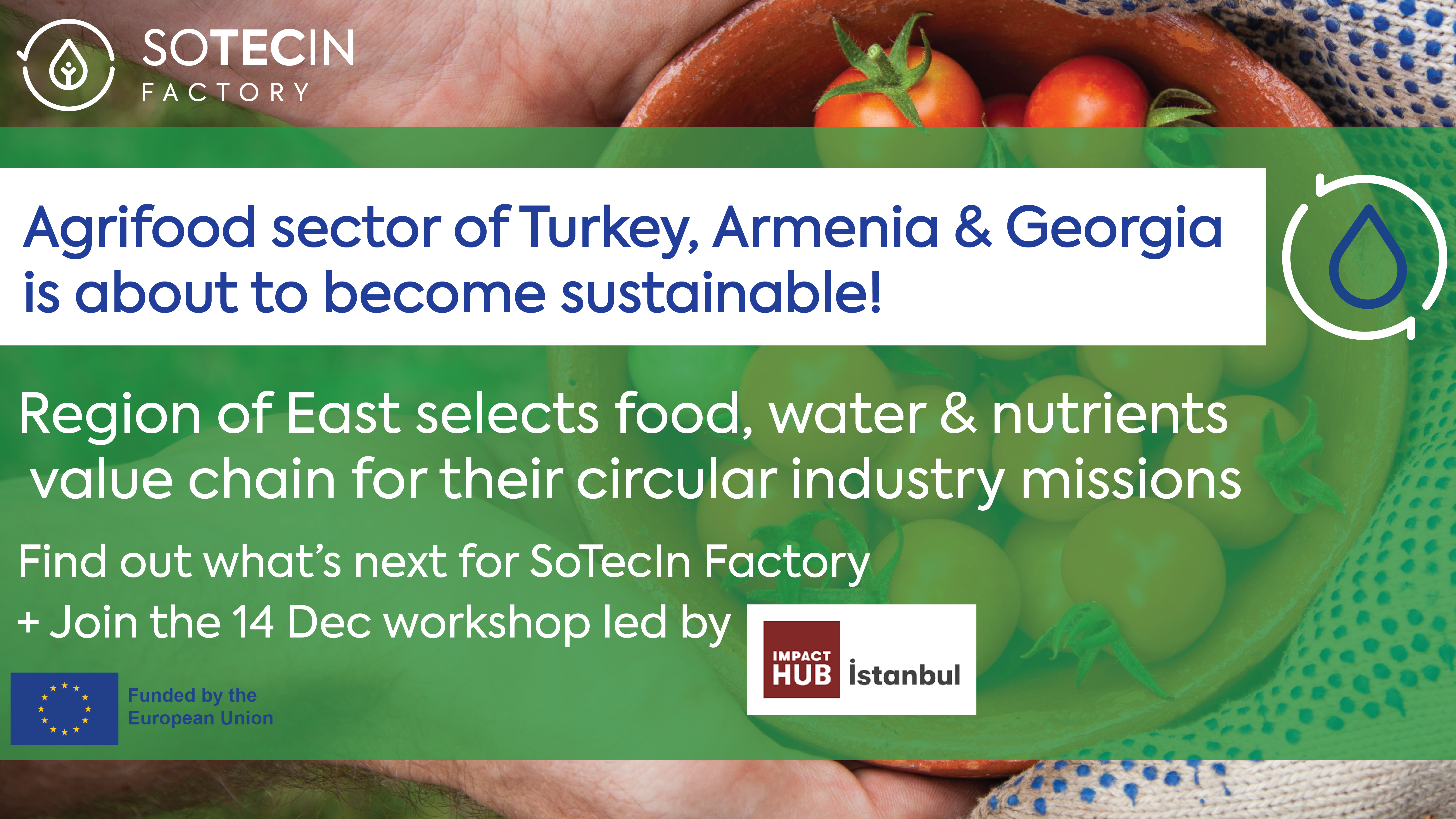 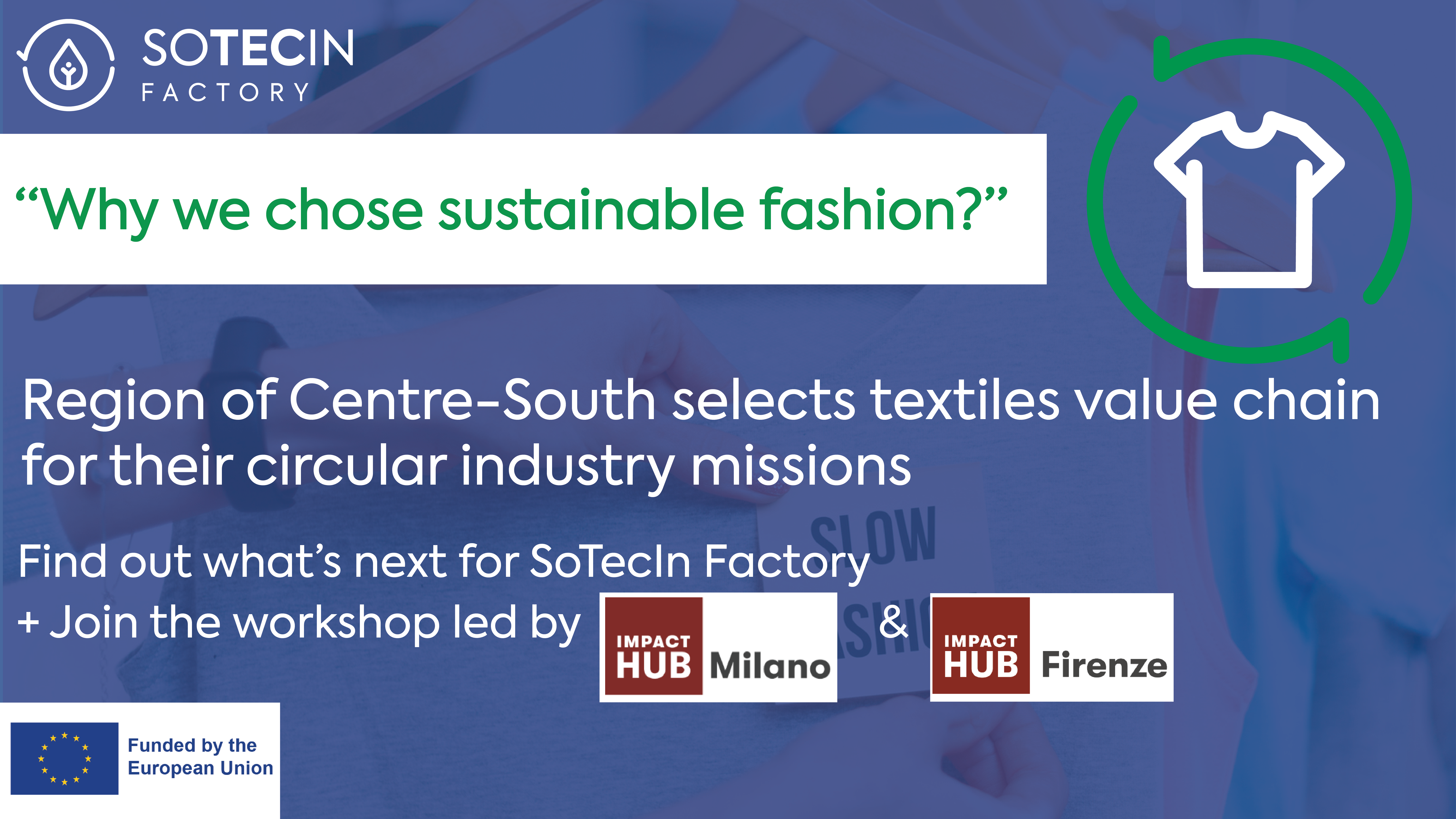